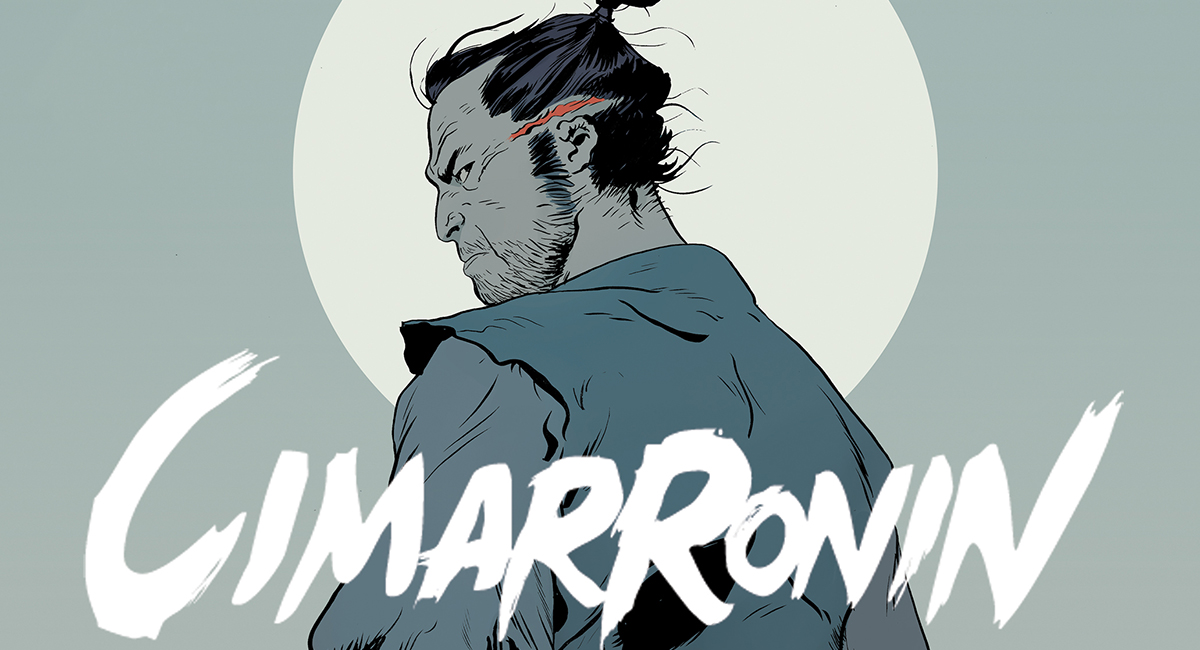 It’s one of those nights. I have so many things in my to-do list that I’m having trouble figuring out what to do first. And all of a sudden, while casually browsing Comixology, one of their sales piqued my interest. A series titled “Cimarronin”, with the catchphrase “A Samurai in New Spain” and a synopsis that promised samurai, Jesuit priests, Spanish dukes, African slaves and Manchu princesses on adventure from Manila to Mexico (New Spain).

Are you kidding me? That sounded like Django Unchained meets Samurai Champloo on steroids! I had to check it out immediately! And so, I did. I  tried to find out if this odd book had been printed, but that wasn’t the case, so I purchased the digital collected edition without losing another minute. And it was quite the deal too, at only $1.99 USD for the 3 issues.

I don’t mind reading comics in digital format, but I prefer the printed object. I think that comic books are sensorial experience: you open them up, take them out of their bags, smell the ink and paper and finally, you feast your eyes on the gorgeous art that your hands are holding. And specially for this type of book, it’s a letdown that digital is the only way to go (at least for me).

Format preferences and controversy aside, this awesome book came completely out of left field for me. With very dynamic art and masterful panel layouts, I immediately could tell that the artists were no amateurs. The characters’ faces had a realistic roughness to them and action scenes were bursting out of the panels at just the appropriate times. Even the colors went along perfectly with the storytelling, utilizing the already classic technique of switching to a grayscale palette for flashback scenes.

The characters’ dialogues were somewhat confusing at times, specially because of the tidbits of historical knowledge needed to get the facts straight in some scenes. This was perhaps the only factor that prevented me from awarding it a perfect score. But aside from that, the story was meticulously crafted to explain the personalities and relationship of our two main characters: Kitazume-san and Father Luis.

Kitazume, the disgraced “ronin”, demonstrated his skill and knowledge by playing a very impressive version of a samurai Sherlock Holmes in the 17th century. He figures out the details of a crime scene in a very demonstrative fashion (à la CSI), determines the kinds of weapons used and successfully theorizes the perpetrators’ identity.

And it’s this first sequence that got me hooked, because it was clear that the writers knew what they were doing. I could tell their facts were well documented, both in terms of history and martial arts.

From beginning to end, the issue had me glued to my screen, and it leaves you wanting more. At the end, the book provided a “Bios” page with a short paragraph about the authors. With 3 writers specialized in historical fiction (Neal Stephenson, Mark Teppo, Charles C. Mann) and 1 in martial arts (Ellis Amdur), it was no surprise that the story had been so thorough. The artist, Robert Sammelin, was a pleasant surprise to me since I didn’t know him by name, but I had seen his work in one of my favorite video games of all time: Mirror’s Edge.

What’s most curious about this team of talented creators is that none of them seems to have any prior experience in the comic book medium (at least not that I could find on the web). But I think that they took their time in creating this extremely cool and detailed story, and it shows that they poured all of their respective talents into it.

Please, do your inner japanophile/tarantito-fan/comic-book-nerd a favor and give this book a shot. The sale is still going, so hurry up and grab it here!

Here are some of the coolest panels to convince you:

CSI of the 17th Century.